TSN convened a panel to debate who is the second best team in the CFL after the Sacramento Gold Miners. The panel consisted of moderator and straight man, Rod Smith, avuncular but twitchy Jim Barker (who is related to my former dental hygienist), Stylin’ & Profilin’ Milt Stegall, and perpetual sourpuss Jock Climie.

Mr. Smith did not offer an opinion, preserving his objectivity in case he is appointed to the Supreme Court.  (I’d like to watch that confirmation hearing. And yes I know we don’t go batshit crazy up here in Canada with our judicial appointment process, but I would love to see Mr. Smith on our top court.  Him or Kate Beirness.)

Mr. Barker correctly listed the Saskatchewan Roughriders as the second best team, pointing out that defense wins championships, although apparently it also coughs up 900 yards in two regular season games and has trouble shutting down teams with losing records.

The always surgical but occasionally hyperkinetic Mr. Stegall expressed confidence in quarterback Mike Reilly, thus anointing the Edmonton Eskimos as the second best team in the CFL.  He then broke out a bag of Japanese kale and White Spruce tree moss and had lunch.

Then Mr. Sourpuss Jock Climie carved them both up by pointing out how the Ottawa REDBLACKS! beat both those supposedly quality teams, thusly earning his vote as the second best team in the league through the process of deductive reasoning and smarmy lawyer-talk. He then embarked upon a lengthy dissertation on natural law and procedural fairness in municipal bylaw enforcement tribunals, citing the seminal Lexington Waste Disposal Inc. v. City of Ottawa decision out of the Ontario Court of Appeal.  I thought he focused too much on the obiter portion of the dissenting judgment. What a jerk.

By the way, I don’t know how long you have lived in Canada, Mr. Climie, but you are still mispronouncing Saskatchewan like you just arrived from Alabama. And yes, I know you are Canadian.  That’s my point.

Here is my review of what the Mighty and Holy Staff at CFL.CA had to say this week in its CFL Nissan Titan Power Rankings.

At 10-2, and with injured starters like Eric Rogers and Ciante Evans starting to come on line, one is forced to wonder how exactly this team will manage to miss winning the Grey Cup this year.

I don’t think the Stampeders even get to the game this year, but I can’t decide if it will be the Saskatchewan Roughriders or the Edmonton Eskimos that will take them out in the West Final.  My heart says Roughriders but my brain says Eskimos.  My spleen says Blue Bombers.  Just joking, my spleen doesn’t talk about anything but Game of Thrones.

The Ottawa REDBLACKS! get the week off so they can re-tool and get back to sucking again. At least, that’s how I see things unfolding in my brain.

Well, that was not an impressive win last week against a lousy opponent, but at least we don’t have to listen to another sorry “stubbed toe” explanation.

I don’t know what to do with the Roughriders’ offense.  Zach Collaros is playing like a solid if unspectacular veteran quarterback who is doing what is expected of him.  His receivers demonstrate that they can be spectacular when they want to be.  The offensive line is protecting their quarterback.  Mr. Mason runs like the NFL calibre running back that he is, and Mr. Thigpen hits nothing but home runs.  However, something is not clicking or connecting.  Perhaps this is a lack of chemistry.  Maybe it will work itself out in the final five games before the playoffs.

Rob Vanstone, Leader-Post Sports Co-ordinator and walking Saskatchewan Roughriders encyclopedia, appears to think the Roughriders’ offense may be showing signs of life. I assume he is simply trying to sound optimist so that someone in the Roughriders’ organization will talk to him again.

By the way, a shout out to Chris O’Leary for being the one CFL.CA writer to pick the Toronto Argonauts to beat the Saskatchewan Roughriders last week.  When all six of the writers line up one way, there is no better way to predict an upset. And yes, I know that all six writers picked Winnipeg over Montreal last week, but that was just the exception that proved the rule.

I suppose that it might be too late for me to try to walk-back all the bad things I’ve said about the British Columbia Lions this season, but their trade for running back Tyrell Sutton has caused me to wonder whether this team might actually get into the playoffs.  Mr. Sutton has been stuck on the moribund and doleful Montreal Alouettes for so long, I don’t think most people realize he is one kickass football player.  He will immediately give the Lions’ offense an added dimension that might transform the team into a legit playoff contender.

I still think that last week’s game represents the high point of the BC Lions’ chances of making the playoffs, but Mr. Sutton changes the equation a bit since no one trades for a 31 year old running back if they are thinking of next year.

Yikes, Hamilton. That game last week was probably the most exciting and entertaining one of the year, and it highlighted the best aspects of the CFL.  But still.  Yikes.

Last week I pointed out that the Tiger-Cats would lose to the British Columbia Lions simply as a result of jetlag.  I was right. Hamilton Tiger-Cats head coach and guy who looks like actor Jeremy Kemp, pictured below in his role as General Streck in Top Secret!, June Jones, was obviously struggling with jetlag when he decided to punt instead of kick. 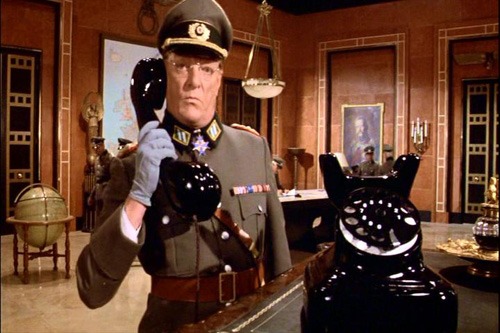 Actually, I’m not convinced that Mr. Jones was wrong.  Who could have thought that the game would unfold the way it did after the Tiger-Cats punted?  You should not make decisions based upon the possibility that a long-shot worst-case scenario will unfold thereafter.*

*Except if you are the head coach of the Saskatchewan Roughriders.  Then all decisions should be based upon the likelihood that a long-shot worst case scenario will unfold every time.

Beating up, or at least scraping by, the Montreal Alouettes gets you exactly nothing and nowhere in the CFL Nissan Titan Power Rankings.  When you play a real live professional football team, we’ll talk.

Hey!  How ‘bout this week?  You get the Edmonton Eskimos, in Edmonton, after a bad loss in Ottawa. Now we’ll see whether you deserve to move up the CFL Nissan Titan Power Rankings.  As for your chances?  My Magic 8 Ball says:  “Don’t count on it.”

Here’s what I think, since you asked.

You put Johnny Manziel on a real football team, he’s going to light it up.  If Saskatchewan Roughriders head coach, defensive coordinator, general manager, Vice-President of Football Operations, and guy who’s still wearing that damned green “Hughes” shirt, Chris Jones, is still with Saskatchewan next year, look for him to trade for Mr. Football.

Currently, Mr. Jones is working out Vince Ferragamo in Florida, but if that doesn’t work out, Johnny Football is next on the radar.

I keep waiting for the references to “sinking ship” and “taking on water” to appear in the CFL Nissan Titan Power Rankings.  Maybe next week.  Either that or a bundle of speculation on why the Argonauts released Duron Carter after only a few weeks on the team.